Oliver Stone is one of the most accomplished film and television directors in Hollywood. He’s known as the master of controversial subjects, like his 2016 film Ukraine on Fire, and pushing his actors to give Oscar-worthy performances. Even when he’s faced with failure, he returns with success. Oliver Stone has created over 32 movies and television shows over the past 50 years … END_OF_DOCUMENT_TOKEN_TO_BE_REPLACED For the action-packed movie addicts who probably thought the new Top Gun could, well… use more guns – a sniper movie may be right up your alley. Whether you simply love a good rifle shot on screen, are drawn in by the non-stop action, or find yourself crushing on the ruggedly attractive main character, here are the best sniper movies you should definitely add to your watch … END_OF_DOCUMENT_TOKEN_TO_BE_REPLACED 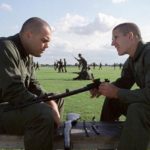 June 26, 2022, marks the 35th anniversary of Stanley Kubrick's groundbreaking film Full Metal Jacket. If you've never seen it before, we suggest you consider watching it because once you do, it will leave you speechless. It's a harrowing story about the Vietnam War that depicts the brutality and reality of war and its effect on the human mind. Don't worry, though, because it … END_OF_DOCUMENT_TOKEN_TO_BE_REPLACED While you’re stuck at home in yet another year plagued by, well… a plague, you might want to brush up on your military knowledge. An easy way to do that is through movies! Whether you’re streaming or catching the latest showing on TV, you’re going to want to tune in to one of these – the best military movies you can watch this year. Another Year, Another Set of the Best … END_OF_DOCUMENT_TOKEN_TO_BE_REPLACED