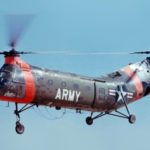 Helicopters are synonymous with the Korean War, as seen in seemingly every film or reenactment of the time. In the 1950s, helicopters reached their heyday. Proving their worth, the U.S. Armed Forces began to increase helicopter production after World War II, with many helicopters debuting after the war. This increase in production led to the creation of several Korean War … END_OF_DOCUMENT_TOKEN_TO_BE_REPLACED The end of World War II fixed many international problems, but it also set the stage for new ones, as highlighted by the Korean War Memorial. As tensions rose between America and its Allies versus countries supporting Communism, such as the Soviet Union and China, it wasn’t long before the United States found itself fighting in yet another war. This time, the conflict would be … END_OF_DOCUMENT_TOKEN_TO_BE_REPLACED