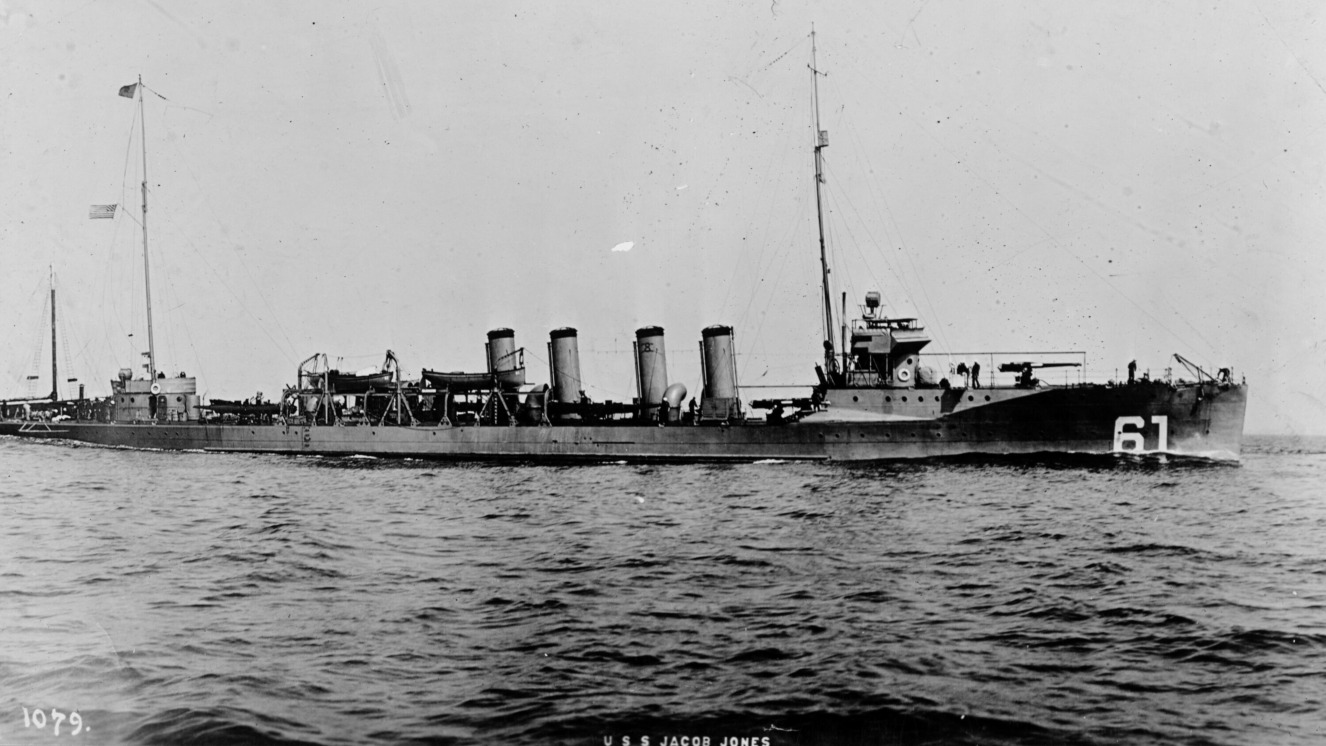 The Great War, now better known as World War I, wasn’t the first war involving a submarine, but it was the first major conflict that had submarines making a massive impact. Unfortunately for those serving aboard the USS Jacob Jones, a Tucker-class destroyer, this would mean their demise at the hands of a German sub. Sunk somewhere in or near the English Channel, the U.S. Navy destroyer shipwreck was lost to the sea, never to be seen again. That is until recently because divers say they’ve found the wreckage of the first U.S. Navy destroyer ever sunk by enemy fire.

More like this: 6 Underwater Discoveries Reveal What the Military Has Lost in the Ocean

Hit by a torpedo on December 6, 1917, in the English Channel, the USS Jacob Jones went down as the first U.S. Navy destroyer shipwreck caused by an enemy. An expert team of divers in the United Kingdom known as Darkstar found the wreckage 400 feet underwater and 60 miles south of Newlyn, Cornwall, off the coast of the Isles of Scilly.

When war broke out between Germany and the United States, the USS Jacob Jones was patrolling off the coast of Virginia. Ultimately, the ships were deployed to escort supply convoys around the U.K. and rescue survivors of enemy fire on British warships, most notably saving 305 survivors from the British cruiser Orama.

Her service came to an end after being struck by SM U-53. Despite efforts from her crew, eight minutes after being struck, the USS Jacob Jones was sunk. 39 men were saved, many by British vessels, but some particularly badly injured crewmembers were actually saved by the sub that sank them.

Nobody is going to ever confuse war with a good time, but the USS Jacob Jones wreck was a tragic one. While 39 Sailors were rescued, many others weren’t so lucky. Of her 103-man crew, 64 of them would pass away due to injuries, exhaustion, exposure to the elements, and drowning.

A notable death was Lt. Stanton F. Kalk, who died because of exhaustion and exposure to the cold Atlantic waters. Lt. Kalk had two Navy destroyers named in his honor and received the Navy’s Distinguished Service Medal posthumously.

These points of recognition are due to Kalk’s final actions of service. As the officer of the deck, Kalk selflessly helped those who were in the frigid water out of the ocean and got them into lifeboats and rafts. He exhibited the best of mankind even in his final hour.

Understanding how Darkstar divers found the destroyer at 115m below the sea over a century later is beyond me, but it’s a remarkable feat that can help America discover and recover a bit of its history.

World War II is arguably the war that gets most of the spotlight in schools and media when not covering current conflicts. But the Veterans that fought in WWI helped defend Americans and others around the world and deserve proper recognition.

It’s sad that those who were serving because of the rampant attacks on vessels from German submarines would face an unfortunate fate, but it’s because of their service that America and her allies were able to ultimately win the war. The U.S. Navy destroyer shipwreck discovery adds another piece to the puzzle of a conflict that would redefine history for decades to come.

Suggested read: America Tried to Blow up the British Using the First Submarine in Warfare