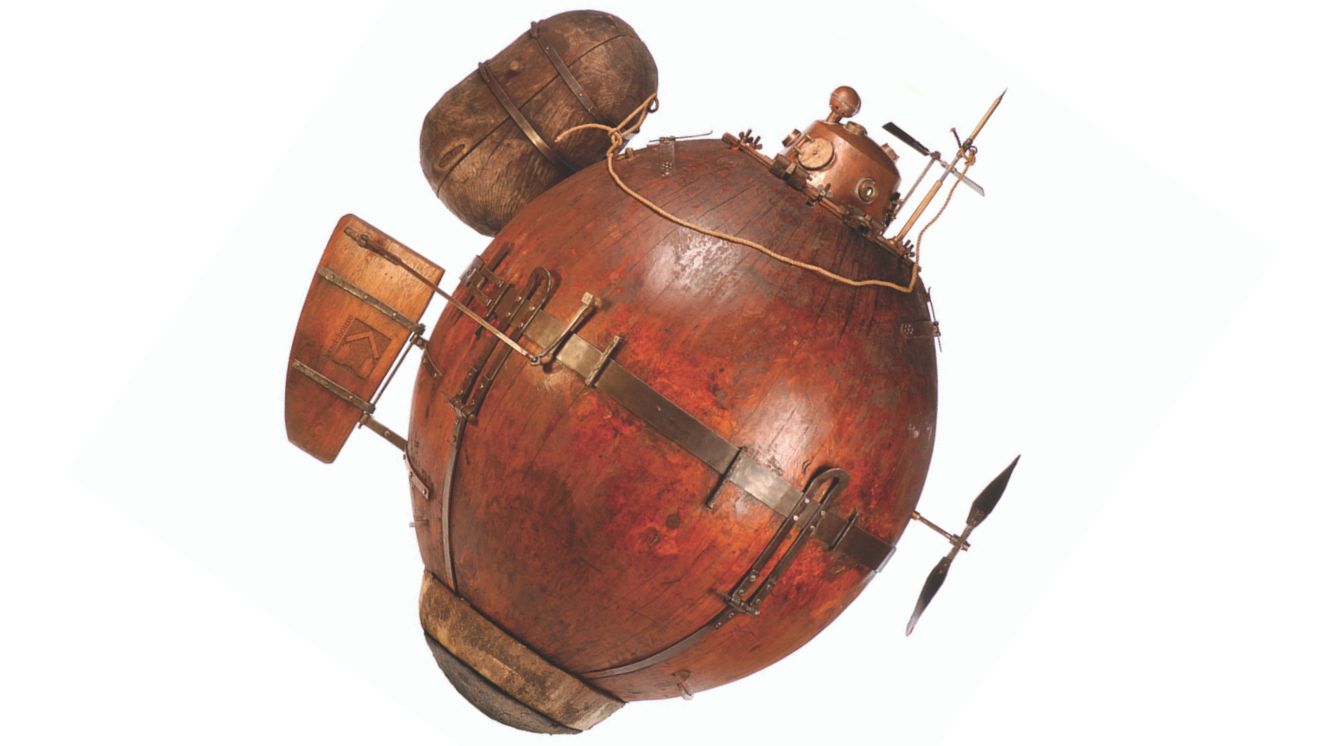 Long ago, the British Empire decided it wanted to f#%^ around and find out what happened when it pushed its colonists too far. In doing so, America was born, thanks to the Founding Fathers and the American Revolutionary War. You’ve heard of George Washington, Paul Revere, the tea, etc., but have you heard about the Turtle submarine? This is one of those things that you wished that they taught you in school because even though its missions weren’t effective, the Turtle paved the way as the first submarine used in warfare. A pioneering moment for naval warfare.

More like this: See the World’s First Successful Combat Sub at Friends of the Hunley

When Was the First Submarine Built?

Cornelius Drebbel, a Dutch polymath and inventor employed by King James I of Great Britain, built the world’s first working prototype in the 17th century. The sub is believed to have essentially been a custom rowboat coated in greased leather with a team of men rowing it 15 feet deep under the River Thames.

As with many inventions, this is a far cry from the submarines we know and use today. The Turtle was as well, but it was the first submarine that would attempt a wartime mission over 100 years later in the New York Harbor.

The First Submarine Used in War and Its Mission

The Turtle’s mission was far from easy, as it had never been done before. The one-man crew was tasked with attaching a torpedo filled with keg powder to the underneath of the HMS Eagle and giving the American Forces a secret way to destroy British ships.

On the night of September 6, 1776, Ezra Lee, a volunteer in the Army, set out to complete the mission, but things didn’t go to plan. To operate the first submarine, Lee would have to submerge the vessel by allowing water inside of its hull and resurface by pumping the water out by hand. Upon traveling to the Eagle, the Turtle’s boring device failed to penetrate the Eagle’s hull.

Eventually, the torpedo was abandoned, only to detonate an hour later, doing no harm. Another mission was attempted; however, America’s first submarine would be discovered, captured, and sunk by British forces.

David Bushnell, a Yale graduate, created the first submarine for America. The eight-foot wooden submersible vessel was created as the best method for delivering explosives. Its name came from its shape, as it was fitted with a design reminiscent of that of a terrapin.

You don’t have to look far to see that submarines have come a long way. Submersible vessels have been used in a wide range of conflicts ever since the American Revolutionary War, including the American Civil War, WWII, and the Cuban Missile Crisis, to name a few.

The nuclear submarine was another revolutionary change that still plays a major role in warfare and the geopolitics that go on all over the world. Nations now have the ability to go undetected while carrying nuclear weapons that can take out entire towns and cities, sparking a war that would be felt throughout the entire world if ever launched.

Find Replicas of the Turtle at the Connecticut River Museum

If you’re looking to learn more about various maritime subjects, including the Turtle, you can visit the Connecticut River Museum. Here, you can find artifacts, research, and exhibits revolving around many different maritime inventions throughout the years.

This includes replicas of the first submarine used by Americans for war, a unique feature of the venue. Visitors are encouraged to explore the wide range of artifacts and periodic events that continue to pull guests in with a unique experience in each trip. Located in Essex, CT, this nearly 35,000-square-foot museum is a great place for all ages to enjoy.

Read next: How Hedy Lamarr Helped the Navy & Created WiFi in the Process