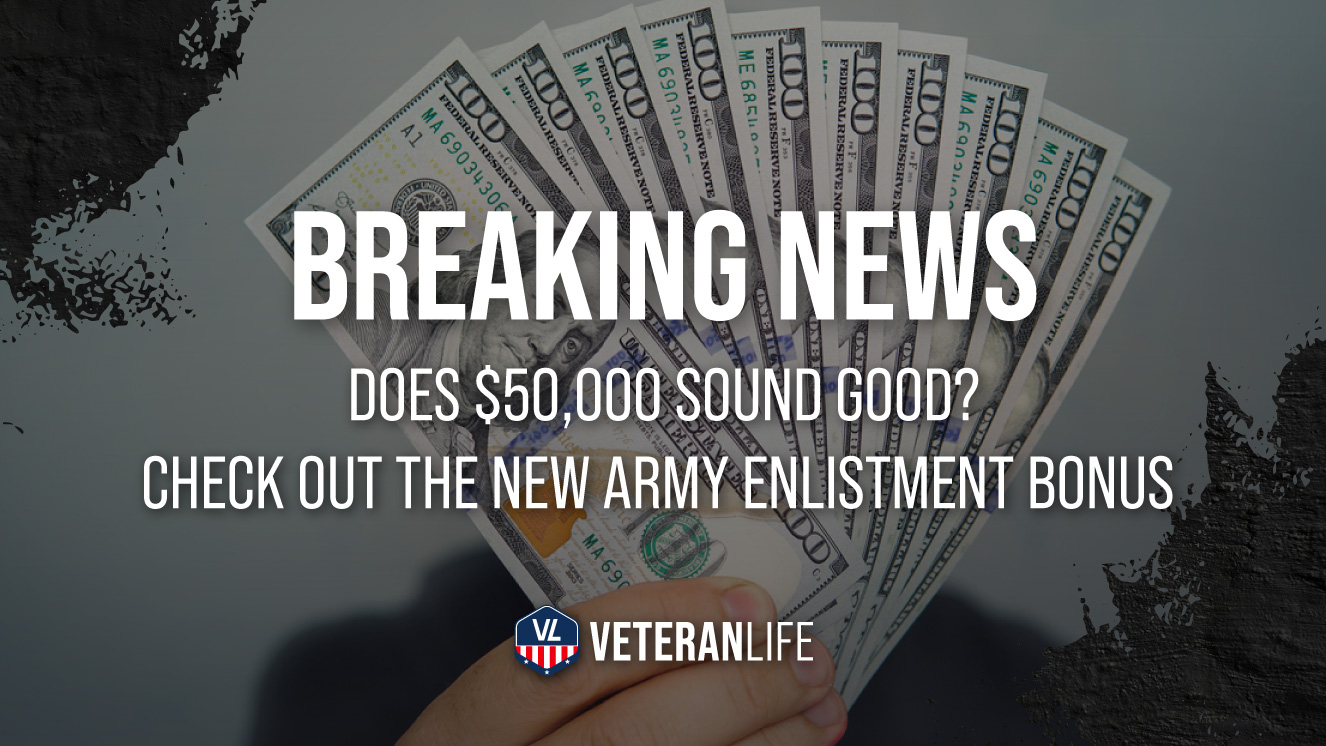 The Army Enlistment Bonus Just Got a Massive Bump

$50,000. That’s easily a year’s salary for most average Americans. Now, new Army enlistees can get that money as a sign-on bonus for joining the Armed Forces.

Earlier in January, the US Army announced a new set of US Army incentives, which includes the massive Army enlistment bonus of $50,000 for new recruits.

Before 2022, the US Army signing bonus could not exceed $40,000, but many new Soldiers may have received even less than that.

How To Get Your Enlistment Bonus

There’s one small stipulation interested recruits should note before jumping the gun and signing up, however. Up-and-coming Soldiers must sign up for a six-year active-duty enlistment period to qualify for the full $50,000 US Army sign-up bonus.

You won’t be eligible if you sign up for a shorter period of service, so make sure you’re prepared to serve for a full six years if you want to qualify for that hefty $50,000 Army incentive.

Ready to join the #ArmyTeam?

The #USArmy is offering its largest bonus ever for new recruits with up to $50,000 available to qualified individuals who sign on for a six-year active-duty enlistment.

How Much Money Do You Make in the Army?

On top of this massive bonus, there are other incentives you can earn as a Soldier for the US Army. Not to mention, you also have your base pay that’s determined by your rank.

Enlistees at the lowest rank, E-1, make on average $1,833 per month. Those in the middle ranks of enlisted, around E-4 and E-5, can expect to make anywhere from $2,400 to $3,700 per month. That monthly pay goes up as your rank goes up, with officers making the most money per month.

In addition to the $50,000 US Army enlistment bonus, there are also “quick-ship” bonuses for Soldiers who are willing to ship off to combat training within 90 days of signing on. You can get anywhere from $2,000 to $9,000, with the higher numbers being available to people who ship out the fastest.

There are even more Army bonuses depending on the Army career you go into. Your local Army Career Center or your Army recruiter can help you figure out what’s best for you.

Career-specific bonuses and incentives are designed to steer Soldiers towards fields where they are needed the most. Airborne (jumping from planes) and Ranger occupations offer the most impressive bonuses.

Into medicine? Discover what life as an Army medic is all about: Veteran Rant – Just Because I Was an Army Medic Doesn’t Mean I’m a Dr.

Why Is the Army Enlistment Bonus Going Up Now?

The Army needs more recruits to fill what they call “critical occupational specialties” and keep base training centers open and fully operational. To do so, they need a large influx of recruits, which means making Army service more enticing for this generation.

Given the socioeconomic position of our COVID-ridden America, a massive increase to the Army enlistment bonus makes the most sense.

How Are Army Bonuses Paid Out?

You won’t receive your Army enlistment bonus immediately. The Army needs to make sure you’re committed to your role in serving the country and that you’re not just in it for the money.

Once you complete basic training and career-specific training, you’ll receive your first payment of $10,000. Following this payment, you’ll receive an annual sum of up to $10,000 per year until your Army enlistment bonus is fully paid.