The Army is preparing for a throwback Thursday with their reinstatement of the historical Army “pink and green” uniform set. Historically called simply “pinks and greens,” the new Army pink and green uniform harkens back to a time when America was helping to save the world from tyranny. Heck, if you’re an old b*st*rd, you might remember actually wearing these iconic uniforms in your youth… how far gone that is!

Whether you’re an old fart who’s part of (or somewhere close to) the Greatest Generation that actually wore these service uniforms in their heyday or you’re part of a legacy family that loves to revel in your family history, you’re going to love how the Army is paying homage to them with these new heritage uniforms. See everything you need to know as well as more fun Army uniform facts below! 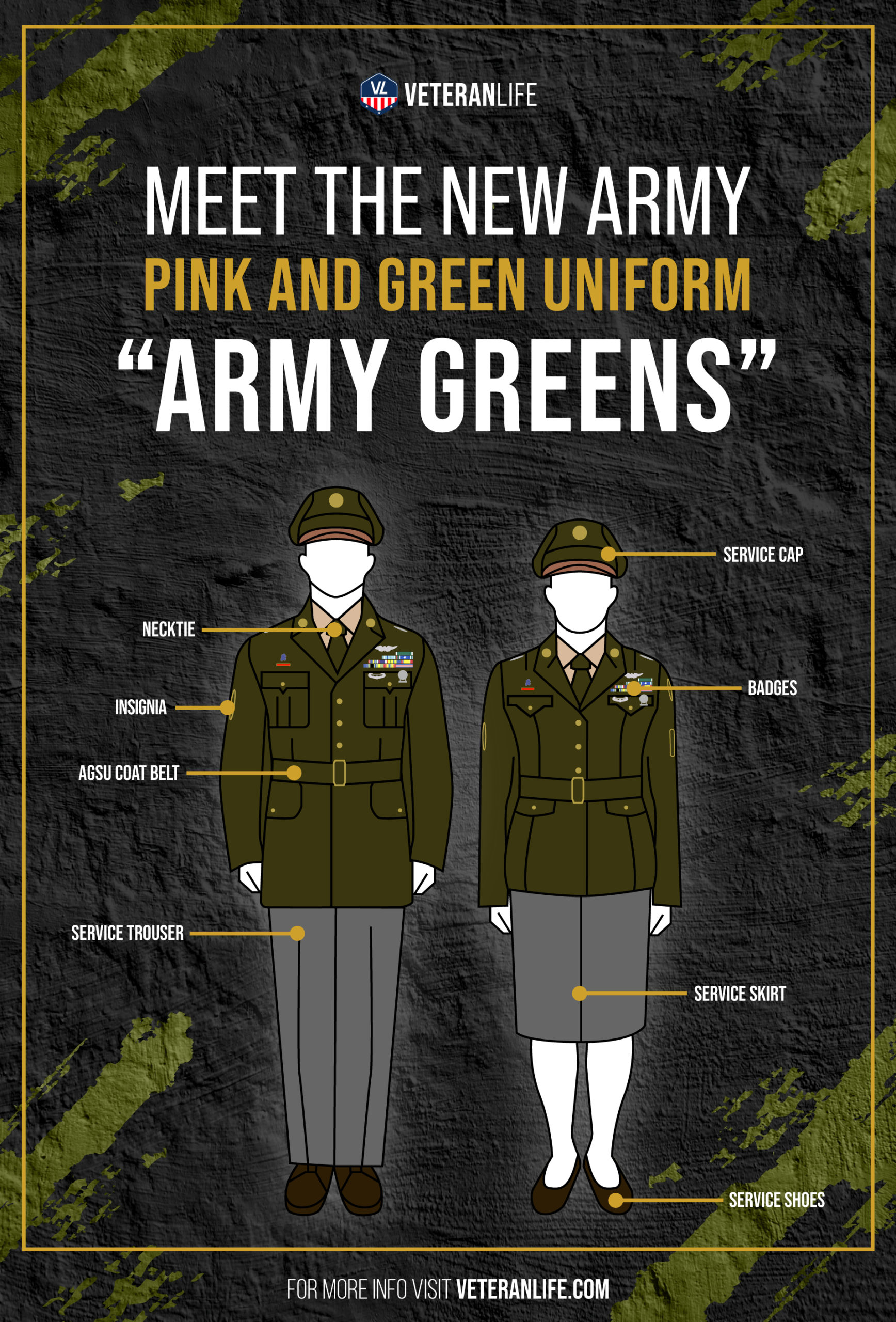 The Army pinks and greens are the most recognizable Army service uniforms in the history of the branch. The next generation of Soldiers is getting their time in the limelight with this new edition of the Army pink and green uniform. Try your best not to go green with jealousy, regardless of the fact that we all know YOU wore it best.

The Army announced this revival in early 2018. The pinks and greens will be making their comeback after around 60 years of leave. In fact, the new design for the uniforms was actually finished in July of 2019, and the Army has already started issuing the new Army pink and green uniforms to Soldiers as of 1QFY21 (or the first quarter of the 2021 fiscal year).

Why NOT now? Don’t you love reminding everyone of your own service every chance you get?

Regardless, there are many reasons why these uniforms are making a comeback in the modern day. For one, the Department of the Army suggested these uniforms as a great option for attire that is “business professional.” Those not in the Army will also see the Soldiers wearing them as competent and qualified members of society (even though we definitely know that that’s not the case for all Soldiers).

The Army pinks and greens were used not only during World War II, but also during the Korean War. The Army believes that these uniforms will go a long way in awakening a new sense of historical pride amongst the ne’er-do-wells of America’s modern youth. They also believe the uniforms will provide a framework for Soldiers to grow into as dedicated and passionate Army Members – everything that the uniform stands for. Maybe they’ll be so inspirational that they’ll even stop all the crayon munching happening over on the Marine side (a Vet can dream, eh?

For anyone who hasn’t heard this term before, don’t be confused. The new Army pink and green uniform isn’t actually pink. You don’t have to worry about looking effeminate or losing any of your manhood with these uniforms (how much manhood did you even have in the first place, though?).

This begs the question, “Then where did the name come from?” As you’ll see, there is a slight pink-ish hue to the taupe khaki trousers and skirts in the traditional pinks and greens worn by Army Members. So you can let out a sign of relief. After all, even though the Army now allows Soldiers to use nail polish and dye their hair during service, outlandish and unprofessional colors are still prohibited. These colors include purple, pink, and orange. So, we aren’t likely to see any outright pink on official Army uniforms any time soon (be that for better or worse)!

“Pinks and Greens” vs. Army Greens

Sergeant Major Daniel Dailey of the Army hopes to discourage civilians from using the term “pinks and greens,” largely because that was the World War II nickname for them. He is calling them simply “Army Greens,” and it seems Soldiers will be using the term, as well. This would work well to separate two generations of Soldiers while still paying homage to the Greatest Generation.

Check out our timelines of U.S. Army combat and service uniforms throughout the years. Try to stay with us; we have a lot of uniform history to cover here.

1926- The original Army Service Uniform was updated with an open-collar coat, collared shirt, and tie.

1937- The Army Service Uniform breeches were replaced with straight-legged khakis. Light blue trousers were also introduced, and the traditional navy blue coats were brought back and modernized.

1943- The creation of the M-1943 Field Ensemble established the need for a distinction between field and garrison attire. Officers were required to wear a darker, belted olive drab coat with pants that either matched the coat or contrasted in a light taupe (a tan/khaki color with pink undertones). Hence, “pinks and greens.”

1964- The “Class B” uniform was introduced. It was a tan ensemble that sported a short-sleeved shirt with no tie required. This was also known as a tropical weight version of the Class A service uniform.

2006- Army Chief of Staff General Peter Schoomaker decided upon a sole service uniform for all ranks of the Army: the dress blue uniform. Mandatory possession was slated for October 1, 2015.

2018- The new pinks and greens Army service uniform was announced. Currently, Soldiers can purchase the uniforms at select locations. Mandatory possession is marked for October 1, 2027.

1775- The U.S. Army is established. Uniforms worn during the Revolutionary War (1775-1783) resembled those of the British military. They had a navy blue coat, white vests, and waist coats. These were usually worn by officers. Due to clothing shortages, there were many mismatched colors and items worn by individual Soldiers. Those within the same regiment attempted to match each other as best as they could.

1812- The U.S. Army attempted to standardize uniforms during the War of 1812 (1812-1815). Still, there was heavy influence from European army uniforms. Gold buttons and a single-breasted navy blue coat were common.

1814- The Army briefly adopted a gray-colored uniform (replacing the navy blue coats) in 1814, towards the end of the War of 1812. This was due to another shortage in blue cloth.

1846- During the Mexican American War (1846-1848), uniforms received the most significant updates yet. Roundabouts, or short, fitted coats, became the norm for young Soldiers. Light blue pants were also introduced, and officers as well as NCOs sported a stripe up the legs of the pants. Light blue fatigue jackets were the standard of dress for non-officers while officers still sported dark blue coats.

1861- The Civil War (1861-1865) saw few notable changes in the Army’s uniforms. The most striking change was the new, and now iconic, kepi hat. The Army also streamlined and simplified their uniforms. Your average Soldier wore a blue wool frock coat. Those ranked first sergeant and above were eventually required to wear a four-button sack coat.

Early-Mid 1898- The Spanish American War (April 1898 – December 1898) marked the beginning of the end of the traditional blue outfitting worn by nearly all Army Members at some point. The last blue uniforms were a navy blue wool shirt/jacket with light blue trousers, which had become a mainstay for the Army in 1846. Officers during this time wore dark blue breeches paired with black boots. Cavalry Soldiers would also wear neckerchiefs.

Late 1898- Towards the end of the Spanish American War, the Army issued khaki uniforms to Soldiers who had returned from Cuba. The material also changed from wool to cotton.

1914- World War I (1914-1918) was the first conflict that saw wide scale khaki and olive uniforms in place of the navy and light blue uniforms of old. During this time, black leather was also replaced with russet, and Army chevrons were flipped to point up instead of down.

During World War I, women also went to battle for the first time ever. They received the older, more traditional blue wool jackets as well as dark blue wool skirts to match.

1941- Olive drab fatigues were added on for better concealment along with the steel M-1 helmet.

1943- The quartermaster general suggested a layering system with a cap, field trousers, four-pocket field jacket, and service shirt for the brutal European winters. This grouping was known as the M-1943 Field Ensemble. Even heavier coats were introduced the next year.

1950- The uniforms from the Korean War (1950-1953) represented new inventions and modernization as a result of the second World War.

The combat boots stopped receiving dubbin treatment, and they were rubbed smooth instead. Herringbone twill cotton (in dark olive drab, of course) became common. They also added large pockets to the new heavy overcoats. This was so Soldiers could more easily store rations and anything else they needed to take with them on the go.

1955- The uniforms worn during the Vietnam War (~1955-1975) were similar to those from the Korean War. During this time, olive green underclothing was required as a means to further conceal Soldiers from the enemy.

1968- The Army introduced tiger stripe camouflage, but it was not official. Variation in local tailoring jobs led to a lot of different camouflage patterns.

1981- The Army introduced the Battle Dress Uniform (BDU). In 1988, they developed a hot-weather variant.

Post-Vietnam War (1990-2000)- Since the Vietnam war, many slight changes have been introduced to fit the environment where Soldiers would be fighting. For conflicts in the Middle East, the Army used soil samples to create a three-color desert camouflage. From this, they developed the Desert Combat Uniform, or DCU, in 1991. Lighter boots were also introduced around this time.

2004- This year saw the introduction of a more modern pixelated camouflage, which replaced the BDU and DCU. Small changes, like the location of rank insignias and badges, also occurred around this time.

2007- The Army authorized the use of a flame-resistant and moisture-wicking combat shirt with a new tactical vest. The shirt included elbow pads and cargo pockets.

2019- The pixelated, or digital, universal camo was retired in 2019, and the Army now uses the Operational Camouflage Pattern.

Even though the new pinks and greens aren’t combat uniforms, we’re certainly excited to see the revival of this historical service uniform. The Army pink and green uniforms, or Army Greens, inspire confidence not only in those who wear it, but also in those who witness the strength and dedication of our incredible Army Members. The new Army Green uniforms are being rolled out right now.

How Much Are The Pink And Greens? – Sarahjocrawford

[…] 2018- The new pinks and greens Army service uniform was announced. Currently, Soldiers can purchase the uniforms at select locations. Mandatory possession is marked for October 1, 2027. via […]

Terrible idea to be moving backward. Not a good-looking inspiring uniform. I think that dress hat could have been picked out of the Axis Powers uniform catalog! What is the Army trying to go back to?