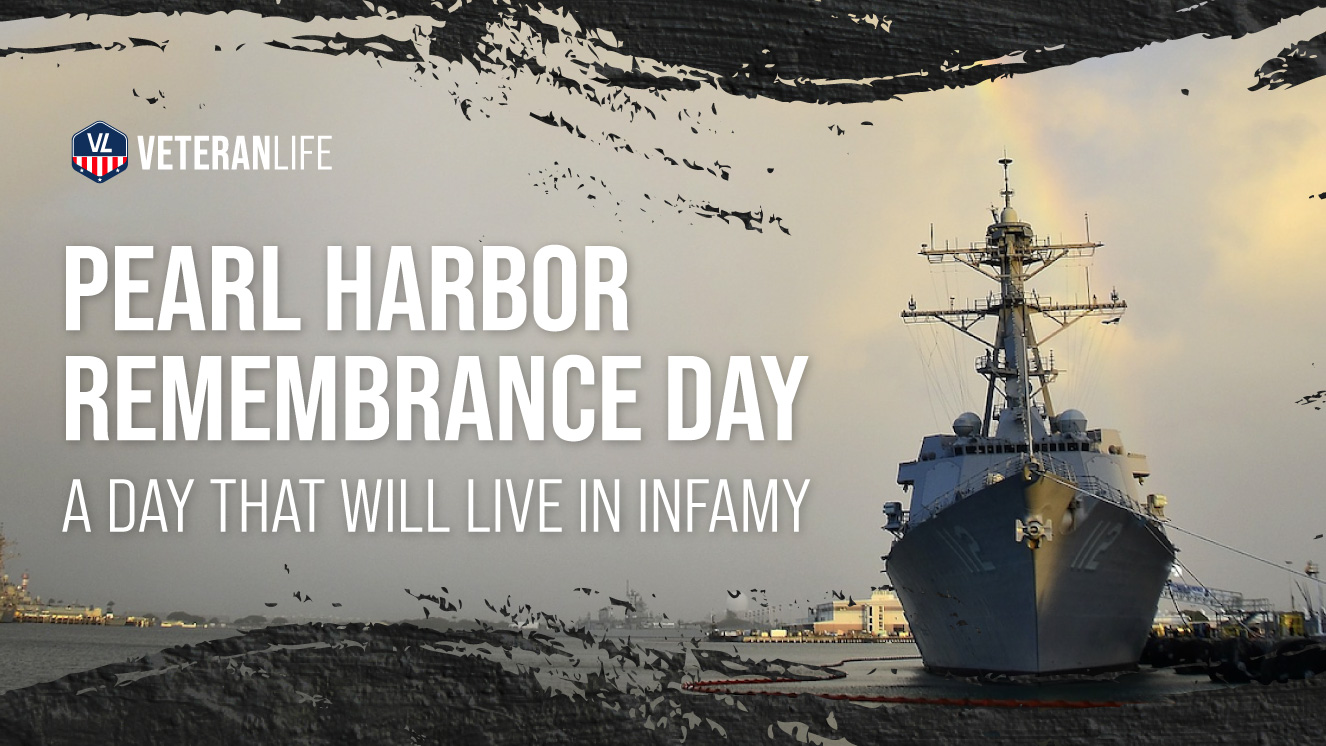 Here at VL, we’re p*ssed off and patriotic, and you should be, too. Pearl Harbor Remembrance Day is a time when we can come together as a nation, and as readers, to feel the rage from the harrowing events of Pearl Harbor and enjoy the pride in knowing that our military men and women were able to quickly bounce back from such a devastating attack on American soil. Join us here as we observe Pearl Harbor Remembrance Day by going over the history, facts, and legacy of this infamous day.

More on military holidays: What Is Veterans Day? Honoring All Who Served

When Is Pearl Harbor Day?

Where Is Pearl Harbor Located?

Pearl Harbor is located in Hawaii on the island of Oahu. It is also known as “The Gathering Place” because it is halfway between Japan and the continental U.S.

No matter how peaceful and luscious Hawaii is in your mind, it’s still home to one of the worst attacks on U.S. soil. If you plan on taking a trip and sipping margs on the beach, make sure you remember who allowed you to have that freedom in the first place, how close to home the battle was fought, and how many people fell along beaches like the one you’re sitting on with your fat, lazy rump.

What Happened at Pearl Harbor?

“AIR RAID PEARL HARBOR. THIS IS NOT DRILL.”

At Pearl Harbor in 1941, a unified group of Japanese planes attacked the Oahu, Hawaii, U.S. Naval Base in two waves.

The next wave, which included some 170 Japanese planes, swooped in and devastated many more warships and killed thousands of Americans.

Lucky for us, the Japanese fleet and their admirals weren’t as smart as they thought they were, or else they could have inflicted much greater damage by targeting different areas of the base or going forward with the plan to send in a third wave of attackers.

The Japanese, via their Imperial Navy warships and air fleet, attacked the U.S. Naval Base at Pearl Harbor. The day that will live in infamy was a surprise attack that occurred in the midst of WWII (1939-1945).

During this time, tensions between opposing powers on the world’s stage were at an all-time high. At the end of the Great Depression, Japan attempted massive expansion following long-term isolation. However, the U.S. passed many sanctions against Japan to try and discourage such rapid expansion, like trade embargoes on oil and metals.

For months before the Pearl Harbor attacks, leaders in Tokyo and Washington had been in negotiations regarding expansion and embargoes with little success. The U.S. wanted to halt their expansion, but Japan felt that the embargoes were insulting to their status as a world power.

It was clear neither side would give in. Japan knew they stood no chance in a frontal assault against the U.S., so they went with the only option that would give them a leg up: the element of surprise.

What Time Was Pearl Harbor Attacked?

How Long Did the Attack on Pearl Harbor Last?

There were two waves to the December 7th attacks on Pearl Harbor. The first wave lasted nearly an hour, as did the second wave. All in all, estimates say that the total amount of time Pearl Harbor was under attack was somewhere between an hour and fifteen minutes and two hours.

Why Was the Attack on Pearl Harbor Significant?

The significance of Pearl Harbor and Pearl Harbor Remembrance Day should be fairly obvious. But just in case you weren’t paying attention, let’s remember how many Americans died in Pearl Harbor. Oh yeah, THOUSANDS of Americans died in the surprise attack by the Japanese — all because they wanted to expand their reach across the globe and puff their chests. If that doesn’t p*ss you off as an American, we don’t know what will!

The shockwaves of the Pearl Harbor attacks were felt long after December 7th. These were the boiling point of World War II tensions that caused America to finally join the battle against tyranny abroad and declare war against Japan. America played a pivotal role in helping the Allies win the war, as we provided supplies and a significant amount of other aid to the Allies during our early involvement in the war.

What Happened After Pearl Harbor?

After Pearl Harbor, America declared war on the Japanese and officially entered WWII, making it truly a day that will live in infamy.

In a completely senseless loss, more than 20 ships and over 300 planes at Oahu’s naval base were either destroyed completely or severely damaged. The most popular of these were the battleships USS Arizona and USS Oklahoma. However, all the battleships in the harbor sustained massive damage that would be incredibly costly and time-consuming to repair.

Among the following damaged battleships in the harbor, all were fixed up and sent back out to sea with the exception of the USS Arizona, USS Utah, and USS Oklahoma, which had all been sunk and completely lost.

The bright side of this horrible attack was that many vital facilities were left partially or completely intact. Things like the naval repair shops, shipyards, oil storages, and submarine docks were spared. This meant that the Navy could rebuild and get back to kicking *ss on the oceans sooner.

Just one day after the attacks, on December 8th, 1914, then-president Franklin D. Roosevelt addressed Congress and spoke one of the most iconic lines regarding Pearl Harbor, and it became the slogan for Pearl Harbor Remembrance Day.

“Yesterday, December 7, 1941—a date which will live in infamy—the United States of America was suddenly and deliberately attacked by naval and air forces of the Empire of Japan.”

By remembering Pearl Harbor on Pearl Harbor Remembrance Day, we can think back on the brave men and women who lived and worked at the Pearl Harbor Naval Base and fought against the oppressive forces of Japan.

If you want to celebrate the lives and sacrifices of these men and women, there are tons of ways to go about it, so just get off the couch and pay your d*mn respects.

If you’ve never visited the Pearl Harbor Museum, are you even an American? We’d say that taking a visit to Hawaii to check out this museum, and see the ship still sitting in the harbor, is a right of passage for everyone in the country.

Remembering Pearl Harbor is made easy with all the resources at the museum. There are eight different tour options, including one that’s literally called “Remember Pearl Harbor,” which is a tour of the Arizona Memorial and Battleship Missouri.

This year, the National Park Service (NPS) is holding a lottery for public access to the Pearl Harbor Commemoration Ceremony, and you can find more details about it on the NPS website and Facebook page.

Discover more memorials every American should visit: 11 Famous War Memorials That Should Be on Every Bucket List

Check out more Pearl Harbor facts and info below!

Pearl Harbor Remembrance Day doesn’t get the coverage it deserves. Take the time this December 7th to reflect on Pearl Harbor and truly think about what it meant to the men and women on that base and the course of American history that the attacks went down in the way they did.

Imagine being at breakfast or getting ready for a day of serving your country when bombs start dropping all around you and the ship you’re on starts sinking fast. It’s a horrifying thought, but it’s important to place ourselves in their shoes so that we understand what that day really means for modern-day America.