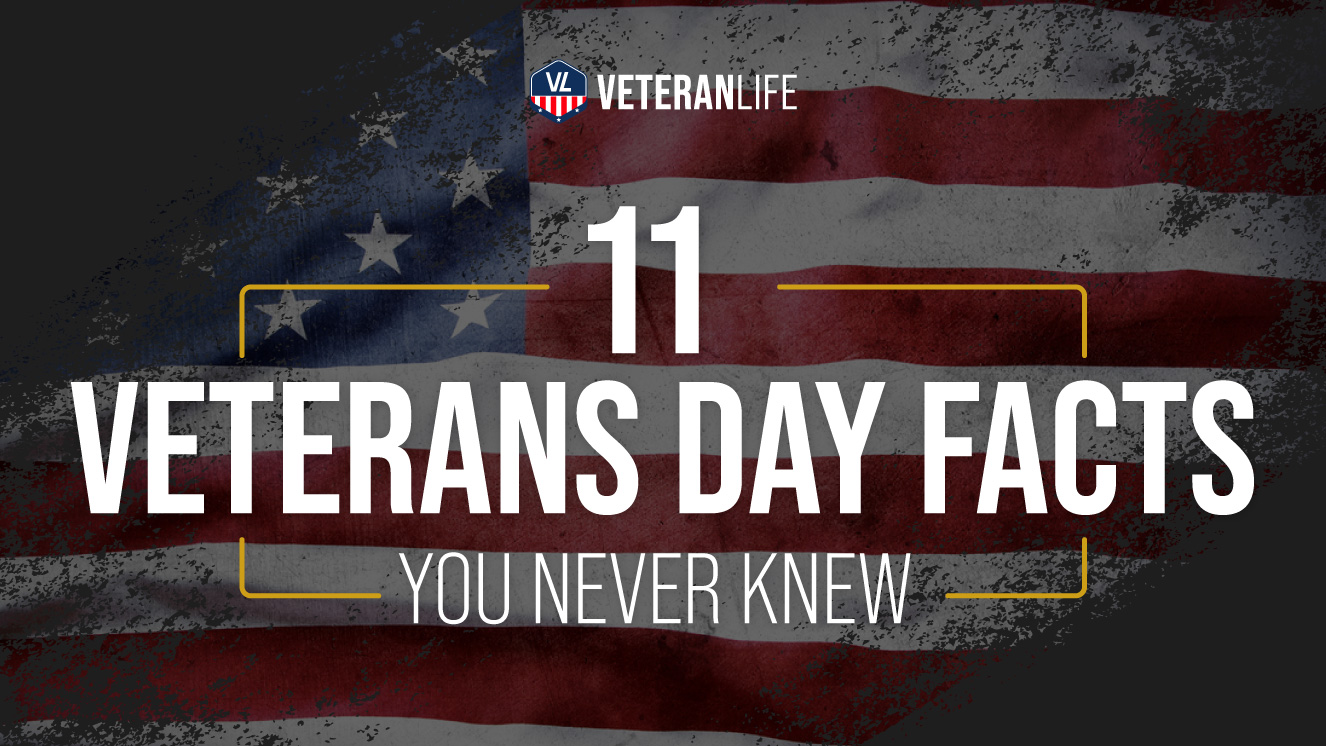 November 11th is Veterans Day in America, which means it’s time once again to learn some new and fascinating Veterans Day facts. Veterans Day is a holiday to remember all who have served in the U.S. Military. On November 11th, we celebrate the courage and sacrifices of our Soldiers, Sailors, Marines, Airmen, and Coastguardsmen (maybe we should even throw a preemptive shoutout to our Space Force Guardians, though they’ve yet to storm the volcano-laden beaches of Venus). It is a day to listen to their stories and learn from their experiences.

Part of this learning means we have to educate ourselves on the meaning of Veterans Day, its history, and the many symbols and icons surrounding the day. If you saw “educate ourselves” and scoffed or rolled your eyes, get a grip on yourself and grow up. This day is bigger than you.

Here are a few Veterans Day facts that will help you understand the history and significance of this national holiday… because we all know you need a little help with that.

Veterans Day was originally called Armistice Day, and it was meant to be a day that celebrated the victory of the Allied forces during World War I.

In 1947, however, a World War II Vet sought to change the name. Raymond Weeks, sometimes referred to as the true “Father of Veterans Day,” held the first “National Veterans Day” celebration in Birmingham, AL. He wanted to honor all Vets in addition to those who served in WWI.

Later on, a U.S. representative from Kansas named Edward Rees officially proposed a bill to change the name from Armistice Day to Veterans Day. President Eisenhower signed the bill confirming the change in 1954.

2. Americans Aren’t the Only Ones Who Celebrate November 11th

Many countries around the world also celebrate November 11th (but as Remembrance Day rather than Veterans Day or Armistice Day). These countries include the U.K., Canada, Australia, and France, among others.

Though Germany was the head of the Central Powers during WWI, a lot of time has passed since then. Germany doesn’t celebrate Armistice Day, Remembrance Day, or Veterans Day as many of us do.

They instead practice something known as Volkstrauertag, which has also been called the national day of mourning, as well as “silent day.” It is observed close to Veterans Day anywhere between November 13th and 19th. Under Nazi rule, it was originally dedicated as a day to glorify the War but has long since changed.

Now, Germans recognize the day as one to remember those who they have lost in war and speak out against the tragedies of war in support of peace.

The WWI battlefield was a place where no life could flourish or even survive. After the fighting ceased and the bombings stopped, however, the ravaged land began to heal as nature took its course. During the healing process, red poppies bloomed and gave new life to the death-tainted landscape of WWI.

In Flanders fields the poppies blow
Between the crosses, row on row,
That mark our place; and in the sky
The larks, still bravely singing, fly
Scarce heard amid the guns below.

We are the Dead. Short days ago
We lived, felt dawn, saw sunset glow,
Loved and were loved, and now we lie,
In Flanders fields.

Take up our quarrel with the foe:
To you from failing hands we throw
The torch; be yours to hold it high.
If ye break faith with us who die
We shall not sleep, though poppies grow
In Flanders fields.

Out of all the Veterans Day facts listed here, this one may be the most poetic and poignant.

5. There’s a Reason It Isn’t Spelled With an Apostrophe

Veterans Day is spelled as it is for a very specific reason. For those of you who failed your primary school English courses, the apostrophe would be the little curly mark between the “N” and the “S,” denoting possession.

Veterans Day is not a day that belongs to Veterans or is owned by Veterans in any capacity. It is a day for everyone, regardless of if they’ve served or not, to reflect on the sacrifices of people who have served. The day may be dedicated to Veterans, but Veterans do not own it.

6. There Are More Women Veterans Than You Think

At ease, men! Women make up approximately 10% of the Veteran population. By 2025, that number could reach 12%.

7. You’re Most Likely To Find a Woman Vet in Maryland

As many as 17% of the women in Maryland are Vets.

If you’re interested in hearing a woman’s perspective on service, that’s where you should head.

The LEAST percentage of women Vets can be found in West Virginia, at about 7% of the female population being accounted for by prior Servicemembers.

Looking for more information on Vet-to-state ratio and benefits? Check out our trending blog 10 of the Best States for Military Retirement in 2022.

Congress signed the Uniform Monday Holiday Act in 1968, and it went into effect in 1971. This created a three-day weekend of four holidays: Memorial Day, Washington’s Birthday, Columbus Day, and Veterans Day.

However, it also changed the observed date of Veterans Day from November 11th to the fourth Monday in October. This sparked outrage among the population, and the date was changed back for the following year’s celebrations.

9. There Is a National Moment of Silence for Veterans Day

Hats off, mouths shut. It’s just two minutes, after all. You’ve survived much worse than keeping your mouth shut for 120 seconds.

Frank enlisted in the U.S. Army all the way back in 1917 when he was only 16 years old. He drove ambulances and motorcycles in Europe close to the front lines. He also served in WWII, where he was captured by Japanese forces and had to spend three years as a civilian prisoner in the Philippines.

If you want to pay your respects to this bada**, you can visit his gravesite at Arlington National Cemetery, where he was buried on March 15, 2011.

While this was when the armistice, calling for a (temporary) cessation of hostilities, was signed, it was not the official end of the War. The ending of World War I is officially marked by the signing of the Treaty of Versailles in France on June 28, 1919.

However, we celebrate Veterans Day on November 11th because that date marked the beginning of the end of WWI.

No matter how many Veterans Day facts you have at your disposal, they mean nothing without action. Come this Veterans Day, be respectful of the Vets in your life. Be there for them on more than just Veterans Day. Listen, learn, and apply the knowledge you gain from them year-round.