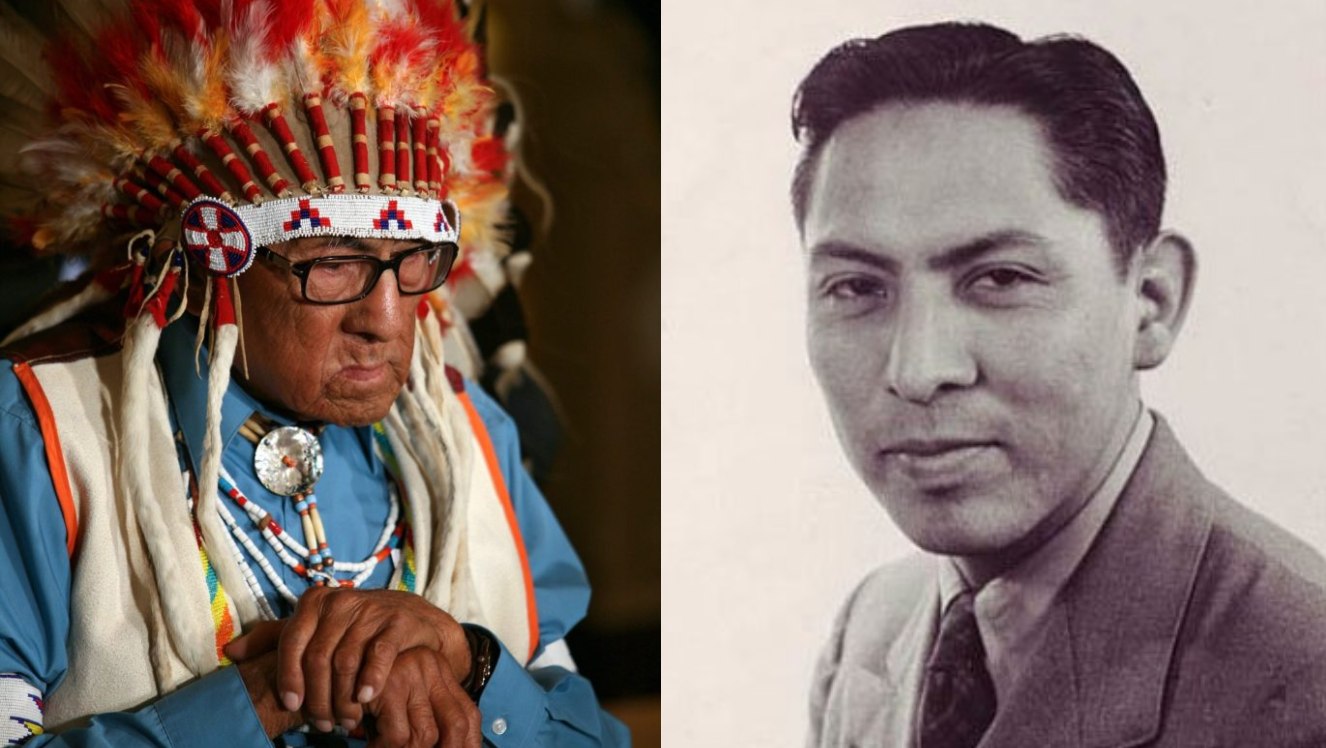 Everyone who has the grit to face the tragedies of war is built different. Let’s just get that out of the way. But sometimes, even within this exceptional group of people, there are those who take things to another level, still. Joe Medicine Crow… make that Dr. Joe Medicine Crow, War Chief of the Crow Nation, is one of those people. But before he was a War Chief, he was a man helping liberate Europe. In doing so, he accomplished much more.

If you take the time to research, you’ll find that Joe Medicine Crow was a Native American historian, author, and anthropologist. It should really just say he was a total bad*ss because not only did he go on to serve in World War II, but he literally became a War Chief while doing so.

Medicine Crow enlisted as a Soldier in the U.S. Army in 1943. He’d go on to fight as a part of the 103rd Infantry Division, working as a scout in WWII. During this time, he was engaged in combat across Europe, even helping liberate a concentration camp.

He would also go on to become what would end up being the last surviving War Chief of the Crow Nation. In order to do so, he had to complete all of the four traditional Crow warfare deeds, which he did:

Never mind the fact that this impeccable feat was never on the mind of Medicine Crow, but with the change of technology and ways of life over time, doing this in the 20th century wasn’t on the minds of many, if any (much less during World War II).

Because he was a scout, Medicine Crow wasn’t always fighting on the frontlines, but on the assault on the Siegfried line, he was part of the unit. America suffered heavily, leaving him and others to complete the mission.

Here, they would have to cross enemy machine gun fire to get back the explosives lost by the American unit during the battle. They did so successfully, fulfilling the requirement of leading a party into battle successfully.

By the 1940s, motorized vehicles were widely available and used for warfare on a large scale for the first time. But there were still plenty of horses used, as well, presenting a unique opportunity.

One night, Joe Medicine Crow was at a farm holding Nazi horses during a mission. He decided to steal one. Then he took around 50 others. This would fulfill the second requirement, and in quite some style.

Finally, both the third and fourth requirements would come after Medicine Crow ended up knocking a rifle away from a Nazi fighter then choking him. After the enemy cried out in pain, he released him and took him prisoner.

This effectively meant that he not only took away an enemy’s weapon, but he also managed to touch an enemy without killing or wounding them, thus perfectly fulfilling all of the requirements necessary for becoming a War Chief.

Funnily enough, it wasn’t until returning home and speaking with elders that Medicine Crow even realized what he had done. They informed him after hearing his war stories, and the rest is an amazing part of history.

Yes, Joseph Medicine Crow was a decorated Veteran and received multiple military medals for his service as a Soldier. These include:

Of course, all of this came along with him becoming a War Chief, as well. In 2009, President Barack Obama would award Medicine Crow with the Presidential Medal of Freedom for his contributions throughout his amazing life.

His Writing Impact on Native Americans

Besides his service in WW2, Joe Medicine Crow would go on to become a storied Native American historian, author, and anthropologist. He preserved Crow Indian culture and history and went on to write a variety of works that helped preserve his culture and educate others.

Most of all, he was known for his writings and lectures on the Battle of the Little Bighorn of 1876. Some of his notable works include From the Heart of the Crow Country: The Crow Indians’ Own Stories and Counting Coup: Becoming a Crow Chief on the Reservation and Beyond.

After returning to the Crow Agency, he would go on to serve as a board member or officer on the Crow Central Education Commission. He would also often lecture as a guest speaker at Little Big Horn College and the Little Big Horn Battlefield Museum, a college Medicine Crow helped found, along with helping start the Buffalo Bill Historical Center in Cody, Wyoming.

No, these two are completely unrelated people. Joe Medicine Crow is a Veteran, hero, War Chief, and keeper of his people. Jim Crow is the racial divide seen in laws and practices against Black Americans from the late 1800s through the Civil Rights Movement. Don’t mix these up.

How Did Joe Medicine Crow Die?

On April 3, 2016, at the age of 102, Joe Medicine Crow died in a hospice in Billings, Montana. But his legacy, contributions, and name will live forever. Native Americans don’t always get enough recognition, but Medicine Crow is one who’s incredibly deserving.

Suggested read: Joseph Beyrle: The U.S. Paratrooper That Helped the Soviets in WWII