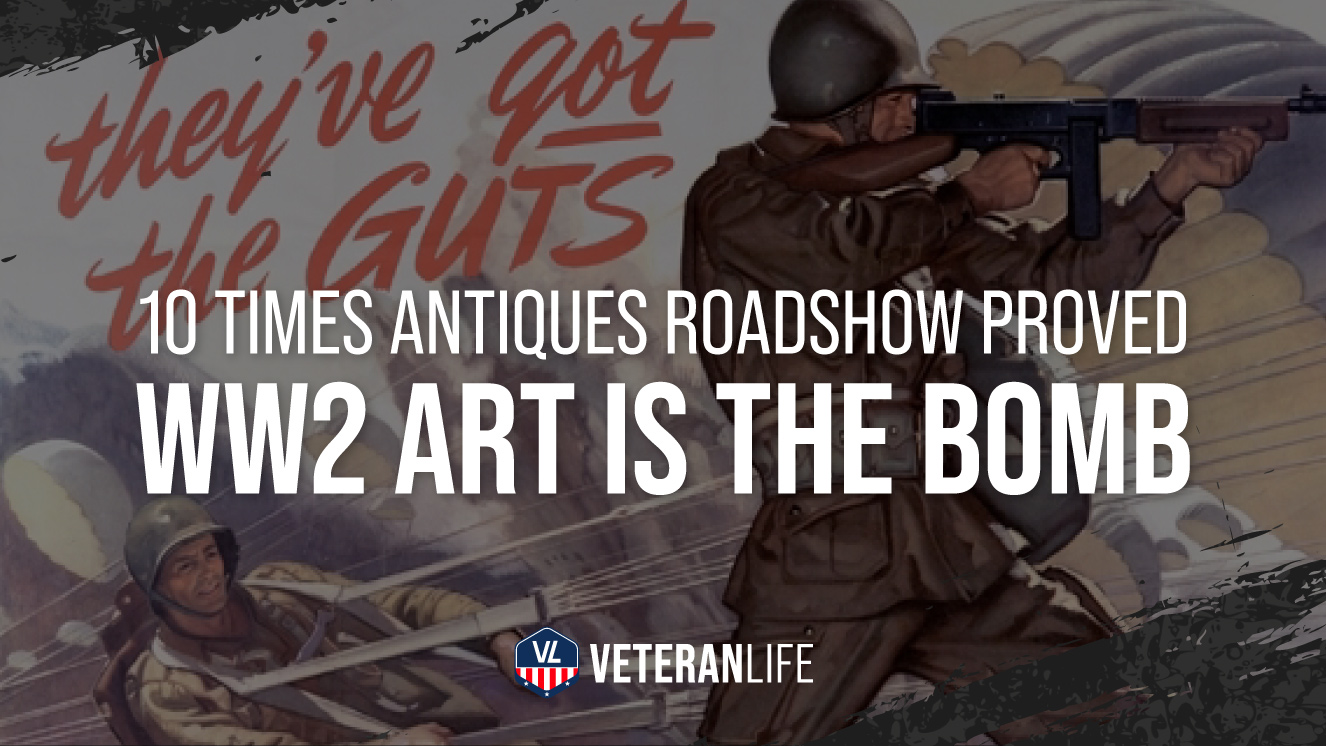 Hand-painted plane nose art and matching bomber jackets, comics and posters, Disney-designed insignia, folk art, and more – artwork from America’s Greatest Generation is bad*ss. WW2 nose art often includes custom bombs or other symbols from successful missions. And so did the A-2 bomber jackets that pilots and crew wore.

Owners are sometimes surprised at the value of art from World War II when there is an appraisal of a family heirloom on PBS’ Antiques Roadshow. One family on this list was surprised to learn the real meaning of a carved “pirate” and “surfer!”

We know you guys are total suckers for facts and trivia about our nation and military. So we’ve gathered some interesting tidbits about WW2 art from our military for you to enjoy and share with your friends and fellow service buddies!

Check out the bombs representing Munich and Berlin missions on the back of the jacket! This bomber is literally da bomb.

2. “Hadda Do It” Flight Jacket

Evident in this Eighth Air Force insignia, they were one of the hardest-fighting groups in WWII.

This aluminum cut from the cowling of a P-40 aircraft depicts a hybrid of a reindeer and a P-40 airplane. The artwork, on the other hand, is something we can all get behind (for the spectacular script font and shading, of course).

The artwork is undeniably bit dark and tragic, as the artist uses comics to deal with the atrocities of war.

“When a war poses for its picture, it leaves to the artist the selection of the attitude in which the artist may desire to draw it,” World War I Soldier-Artist J. Andre Smith.

If you can forgive their modern money-grubbing corporate practices, Disney has a fascinating history, and they even had a hand in wartime efforts.

More like this: 12 of the Best Military Museums for History Buffs (2022 Edition)

6. A-2 Bomber Jacket and Photo

A whopping 30 bombs on the jacket’s chest indicate many successful American missions.

Pirate or Mussolini? Surfer or Stalin? Hand-carved from the Minnesota forest representing WWII world leaders, these are a Swedish immigrant’s political statement.

In 1943, the USS Plaice conducted war patrols in the South Pacific towards the end of World War II, and the flag is a record of the ship’s service.

This series of posters, found in the artist’s mother’s closet recently, earned a letter from two brigadier generals thanking him for the artwork. This just goes to show that your dust-filled attics and skeleton-laden closets could hold some fascinating secrets and histories. Time for some spring cleaning!

Connect with local museum info for the military installation of your choice in MyBaseGuide’s community info.

The 507th’s black and orange jumping spider, with his lightning bolt and lit bomb, is one of the most distinctive and memorable of all the Airborne patches of World War II.

Even after surprising appraisals like those listed here, many military families consider their WW2 art priceless. You’d be cold-hearted to get rid of such deeply historical pieces that hold massive significance to both your own family and the nation at-large.

As time marches on, WWII’s sights and sounds disappear. But we can still see the courage exemplified by the Veterans of the war in these artifacts. OF COURSE many Americans choose to keep iconic pieces in the family to honor their loved one’s legacy of securing global freedom. You would have to be heartless not to.

More like this: U.S. Military Dress Uniforms: What Each Branch Wears To Look Their Best