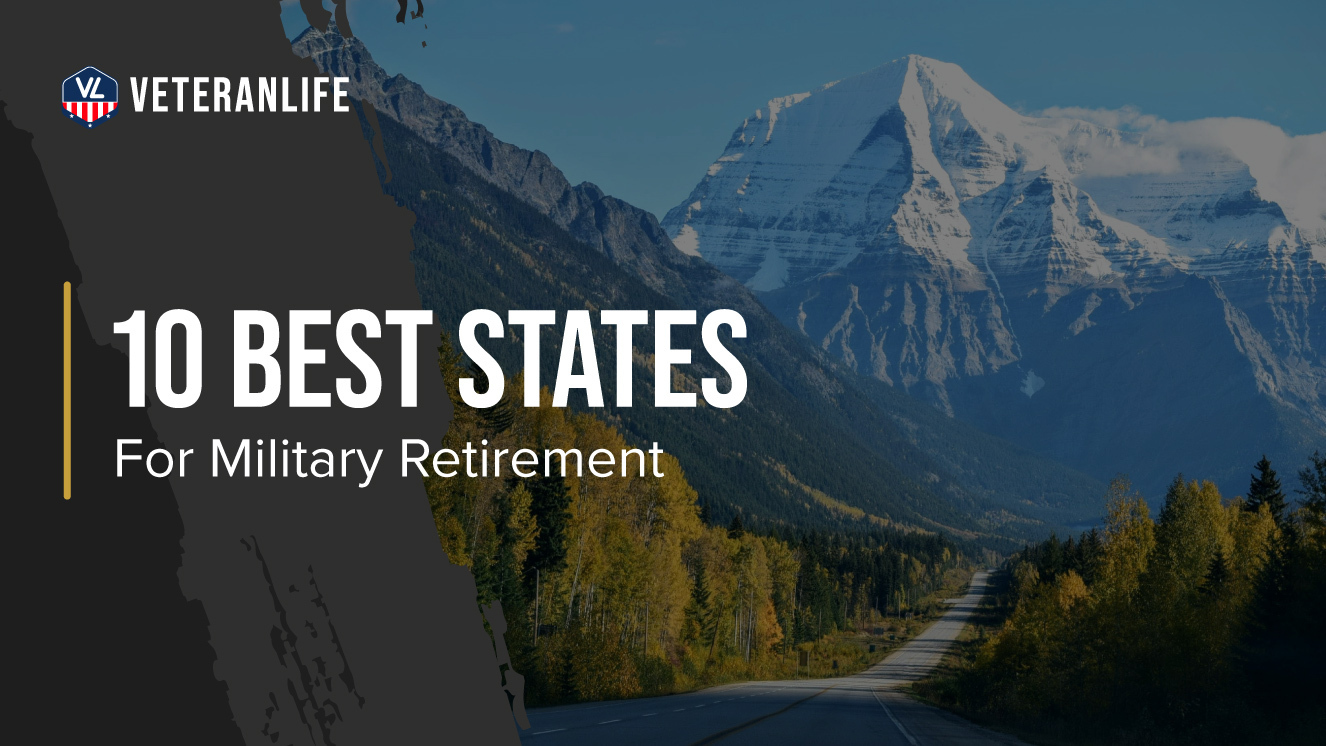 When you or (your spouse) were active duty in the U.S. military, there were many obvious differences between our lives and civilian life—starting with the fact that many of our choices were made for us, including where we could live.

But once you got your DD-214 and became a veteran, the lines may have quickly blurred—because for the most part, civilian retirees and military retirees share many of the same priorities. We’re all basically looking for a place to live that’s affordable, comfortable and accessible.

If you came here because you’ve been searching for information about the “best states for military retirement,” you’ve probably already seen many other “best states for retirees” lists and similar types of advice out there. Some of it might be relevant for you. Some of it we’ll talk about here.

However, some probably missed some aspects that are important to you as a veteran. For instance, you might want to know the states that don’t tax military retirement, which would not matter to civilian retirees.

There are many ways to determine which states are actually the “best,” and only you can decide which are really the best for you. The ones on our overall 10 best states for military retirement list are on it because they appeared the most often in lists for four categories we thought were most important:

Taxes are inevitable in some form, no matter if you are a civilian or military retiree, or wherever you may live. This is why if you are a retiree with a fixed income, you might prefer tax-friendly states.

An additional 21 states don’t tax military retirement pay but do have state personal income tax, which is why you might consider them the best tax-friendly states for military retirees.

“Cost of living” (or COL) generally refers to all the stuff (called an “index”) you need to live a “regular” life—housing, transportation, etc. That is why talking about COL can vary, depending on who created the index.

Both civilian and veteran retirees will probably want to live in states with the best cost of living, for obvious reasons. According to Business Insider, in 2021, those states included:

Although taxes are inevitable, it’s almost impossible for civilian or military retirees to avoid health care costs. Whether it’s for regular checkups and procedures or long-term and assisted living, here are some of the best states for veterans to retire when it comes to health care.

Most veterans and their spouses will usually have access to VA medical centers. However, you either might not want to use a VA center, or not all family members will be eligible. No matter your reasons, U.S. News and World Report ranked the following as top the states with the most affordable health care in 2020:

Veterans Affair (VA) health care facilities are available in all 50 states in the U.S., as well as the District of Columbia and U.S. territories. This makes any state among the best states for military retirees to live, especially since the VA recently dropped its internal star rankings of hospitals.

Assisted living centers could also be something you’ll need if you’re an older retiree or have a disability that requires extra care. According to SeniorLiving.org, these were the top states for lowest annual assisted living costs in 2021:

Once again, military retirees have access to VA health care facilities in every state. This is why it’s difficult to identify the best states for disabled veterans to retire if assisted living, long-term care or nursing homes are your top concerns. If they are, click here to learn more about some VA benefits.

Military retirement doesn’t have to mean an end to being employed. For some veterans and their spouses, part- and full-time jobs are ways to bring in extra income to supplement their pensions, while for others, it’s a way to stay active and involved.

No matter why you need or want to work, here are some of the best states for retired veterans, based on U.S. News and World Report rankings for unemployment, job growth and labor force participation:

If employment is a key factor in how you are determining the best states for your retirement, instead of just going to where the jobs might be, you might want to also think about what kinds of jobs you want and if they’re available in those states. This includes some of the best jobs for veterans you might not have considered!

Your retirement will hopefully give you many opportunities to enjoy life. What you do for fun or where you will be most comfortable—and how that helps you find the top states for military retirees—all depends on you! Here are some ways to think about lifestyle and the best states for retired military to live in.

There are many reasons why you might want to live in states with high concentrations of retirees—starting with the assumption that retirees (or more specifically, people age 60 and older) live in those states because they generally are the best states for retirees. After all, there must be some reason they live there, right?

No matter why they live there—or why you might want to—here are the states with the largest populations of people age 60 and older, according to AARP:

Like with states that have high concentrations of retirees, it’s probably fair to say that veterans are attracted to states with lots of vets because they are military retirement friendly states. If living in a state with lots of veterans is important to you, you might want to consider:

Like saying which are the best states for military retirees, the same goes for retirement communities: It all depends on you!

First, they are not for everybody. They can be expensive and come with a lot of regulations about what you can and can’t do around your residence.

On the other hand, they usually offer a variety of amenities like pools, fitness centers, social clubs and more.

There are retirement communities in every state, so, if you are interested in them, you will probably want to look at states with high senior population rates (in the previous section). 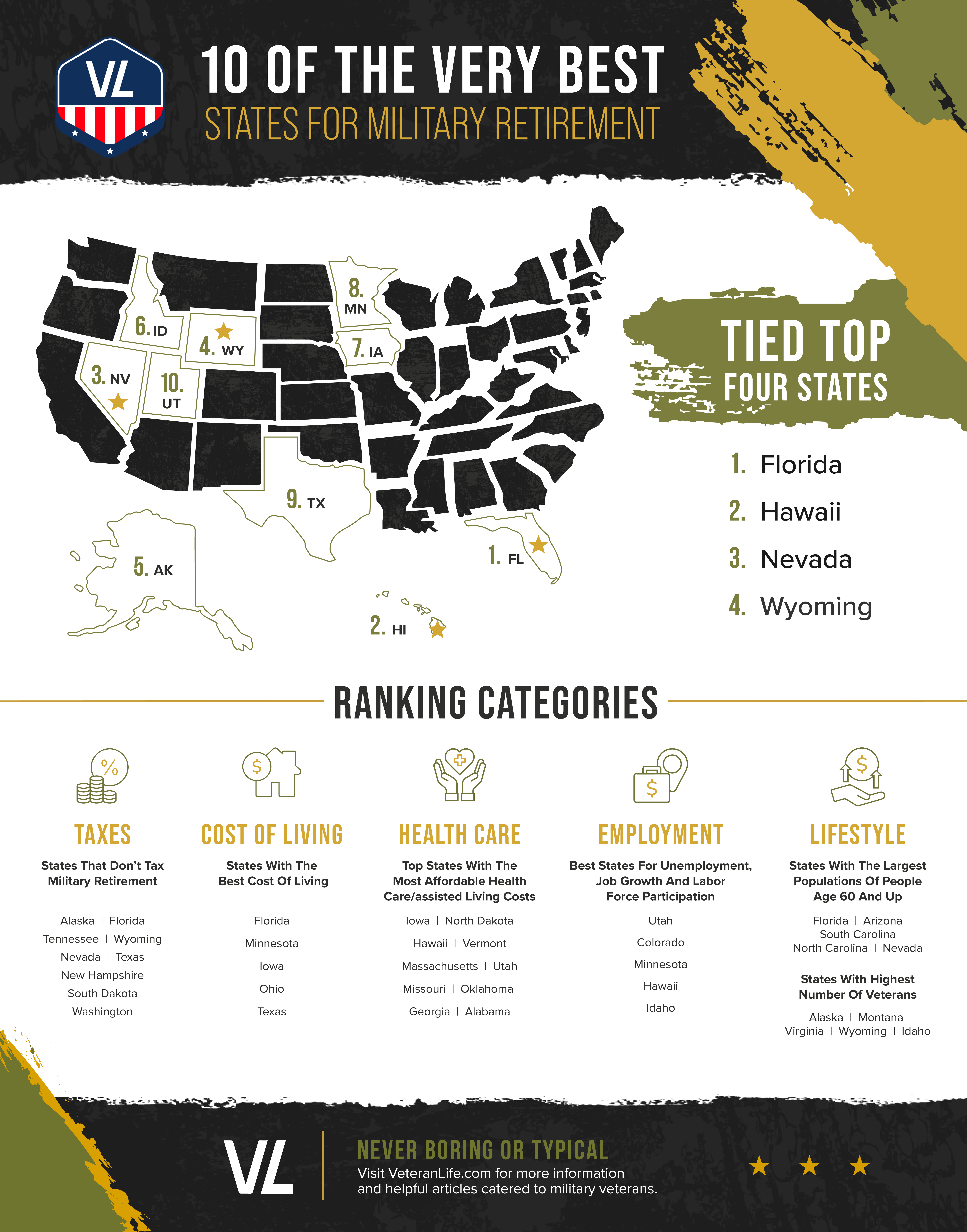 The states listed below appeared in more categories than others, which is why they are on our top 10 best states for military retirement list.

If we didn’t make it clear in this article, let us say it now: We can’t say which is the best state for military retirement for you. All we can say is that you’ve earned your retired veteran status, and we wish you the best of luck in your retirement!

So, veterans: What did you think? Which categories or subcategories or other factors did we overlook or maybe get wrong? Do you have any advice for veterans that are looking for the best states for retirement? The comments section is waiting for you!

Jamie Rogers edited and wrote content for My Base Guide relocation publications and MyBaseGuide.com; for Alaska Contractor, the quarterly publication of the Associated General Contractors of Alaska; and JumpCrew magazines highlighting chambers of commerce across the nation.

Really?! Tennessee didn’t beat Florida, Minnesota or Texas for cost of living with those property taxes?! Tennessee didn’t beat Iowa, North Dakota, Missouri, Oklahoma, Georgia or Alabama for Health Care with Vanderbilt and UT Knoxville hospitals and rural care?! Utah, Idaho and Minnesota are beating Tennessee for Employment with Amazon and Cisco moves to Nashville?! And you are wayyyyyyyy off on lifestyle, which I guess is subjective. In my opinion you have really missed the mark here and need to do some more research.

I moved from Ky to Tennessee this year and do not regret it at all. For 100 percent service connected vets the property tax on the first 175,000 of the houses value is exempt, wheel tax is exempt on primary vehicle plate is free and permanently stay with your vehicle and no state income tax. My auto insurance dropped 500$ for six months just by moving 10 miles over to Tennessee.

Last edited 1 year ago by Timoth A Anderson
52

The article deftly sidestepped an increasingly important consideration these days – that of politics. It really calls into question one’s desire to “be the change one hopes to see in the world”, or to step back, put on blinders, and look no further than one’s own backyard. Communities that value diversity and strive to protect natural resources are the places that interest me and my family, even if I have to pay more to live there.

I think you should be more specific with your list. Florida doesn’t tax military if they have proven 100% disability. You don’t get help with parking for the disable if you are not 100% disable. It is not that easy. Property taxes in Florida are very high and home insurance due to hurricane are very high as well.