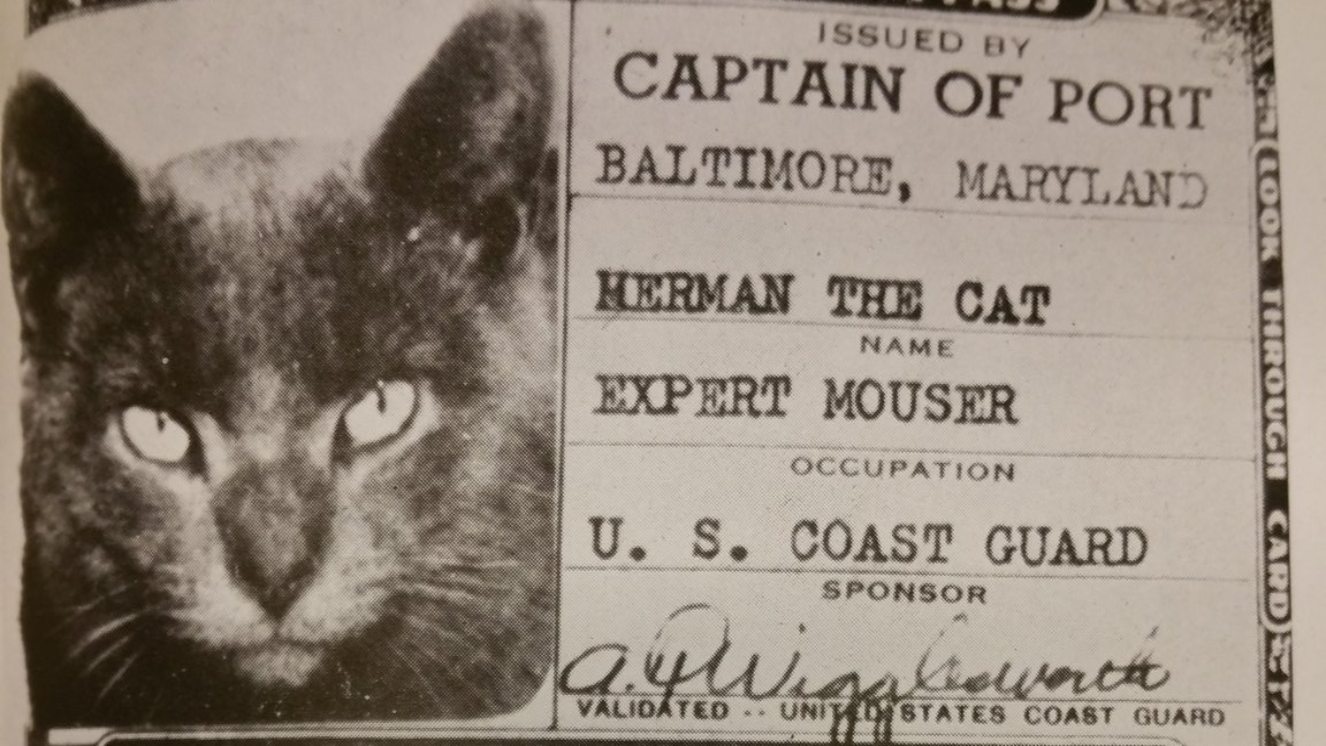 We’ve heard endlessly about military dogs, but what about their smaller four-legged companions, cats? Surprisingly enough, cats played a significant role on Navy and Coast Guard ships at one point in time. Andy Mitchell’s Inside the Mind of a Cat Netflix documentary highlights this point about our feline Navy cats. Specifically, it tells us about the U.S. Coast Guard “Expert Mouser” Herman the cat.

Was There Actually a U.S. Coast Guard Cat Named Herman the Cat?

As surprising as it sounds, yes. In fact, British Navy ships all sailed with a cat on board until the 1970s.

In 1943, Herman the cat would officially be commissioned by the military as an “Expert Mouser.” His primary duty was to control and extirpate the rodent population aboard the vessel.

Herman officially became a member of the U.S. Armed Forces at eight months old. Just like any other Coast Guardsman, Herman was issued an identification card for his hometown in Baltimore on January 12. His ID was as legit as anyone else’s, having a formal serial number of 05225058 authenticated by pertinent officials.

#ThrowbackThursday: ID for Herman the Cat, issued 1/12/43 by Captain of Port, Baltimore, Maryland. Occupation: Expert Mouser. Sponsor: U.S. Coast Guard. Signed with an X, and including his paw print. pic.twitter.com/8HP4rcciXl

So, what exactly was Herman’s job as an Expert Mouser? Well, the Maryland feline had unrestricted access to the port waterfront no matter the time of day. His job? Hunt every mouse, rat, and rodent aboard the ship to his complete satisfaction. Herman wouldn’t be the first cat to play such a role on a boat.

As per Mitchell’s Netflix original, this practice long superseded Herman’s reign. According to Dr. Eva Maria Geigl, Paleogeneticist featured in the documentary, “Ships are probably the predominant means of spreading of the cat.” She would state, “With humans, the rodents went on the ships and the cats followed. So, there was not a single ship, probably, that went out of the port without cats.”

Before Herman, cats were incredibly important on ships during the 1900s because they had a natural instinct to hunt and kill rodents. In doing so, cats prevented the spread of lethal diseases from place to place while securing food storage and helping ships avoid infrastructural damage.

According to the U.S. Naval Institute, the Egyptians were the first to realize the full value of having cats on ships.

Are Cats Used in the Military?

Although cats played a significant role on Navy ships at one point in time, most of the world’s naval forces banned cats and other pets from all vessels for hygiene purposes.

That doesn’t mean the military completely stopped using cats to their advantage. As recently as 2019, the Barksdale Air Force Base Honor Guard made a cat named Captain the unit’s official mascot and mouser extraordinaire. The feline’s job originally consisted of hunting rats, but it soon became the unit’s emotional support pet.

What Are Ship Cats Called?

Ship cats came to become known as “polydactyl cats” due to the fact that polydactyl cats were the preferred feline. Polydactylism is a genetically inherited trait that causes an organism to develop extra toes or fingers.

Previously, these cats were considered good luck aboard ships because of their additional toes. Their extra toes allowed them to climb higher and faster than normal cats, making them perfect hunters.

Besides Herman the cat, there’s been a plethora of noble felines to have served in the armed forces, cementing their names in history. Here are five valiant military cats you should know:

Between May and November 1941, Oscar, also known as “Unsinkable Sam,” survived three significant WWII shipwrecks. After the third shipwreck, he spent the remainder of his days in the UK, where it was more tranquil. The National Maritime Museum in London’s private collection contains a portrait of him.

Peebles, the ship’s cat on the HMS Western Isles during World War II, was well-liked and regarded by the crew. He even extended his paw to strangers.

On several aircraft carriers used by the Royal Navy, Tiddles served as the ship’s cat. He enjoyed toying with the bell rope while on the aft capstan. During his tenure in service, he covered more than 30,000 kilometers.

On HMS Prince of Wales, where Prime Minister Winston Churchill traveled in 1941 to covertly meet with American President Roosevelt to proclaim the Atlantic Charter, Blackie was the ship’s cat. Famous photos of Churchill and Blackie’s encounter led to the cat’s later renaming as Churchill in recognition of the visit.

Another popular Navy cat, Simon served as the ship’s cat on the HMS Amethyst, a sloop-of-war of the Royal Navy. The only cat to ever get the Dickin Medal, he was promoted to the level of “Able Seacat” Simon and given the honor posthumously. Full naval honors were accorded to Simon’s funeral.

Herman the cat isn’t alone in his exciting escapades among Coast Guard and other military ships. We offer a hearty salute to Herman and all the other military cats that are sometimes forgotten about in the shadow of their larger frenemies: dogs.

More like this: Animal Heroes: 6 Military Animals That Made a Difference